My last stop in Cambodia was in Siem Reap to visit the temples of Angkor. Since I was on Koh Rong Samloem, I had no idea when the bus to Siem Reap would go. From some other travelers I knew that there was a night bus. In the morning I took the ferry back to the mainland and went to a travel agency to get my bus ticket. Everything worked out fine, without any problems. The bus didn't go till late afternoon, so I had some time to spare and spend the day at the beach.

NOT! Late afternoon, it was finally time to get on the bus. The bus was supposed to get to Siem Reap in the next morning, but in the end we were over 8 hours delayed and got there in the afternoon the next day. Our bus broke down in the middle of the night. No idea what was wrong, but we ended up parking on a road for 3-4 hours at night. In the beginning no one really noticed, since everyone was trying to sleep. After I woke up around 2am, I was asking what the problem was but no one really knew. At 4 in the morning a new bus was finally there. We had to grab our stuff on the bus and move to our "new" bus. Unfortunately, our new bus looked more like the one shitty bus they just use if no other is available. We finally were back on the road again, but after a short time we noticed that the A/C wasn't working. After a very long day, we finally arrived in Siem Reap around 8 hours late.

Angkor Wat and others

The next morning we went to the famous temples of Angkor. On an area of over 200km² you can find more than 1000 temples. The most famous of all, is Angkor Wat, the biggest temple in the world. Since there is so much to see, most visitors spend multiple days exploring the temples. I decided to visit just for one day and try to see as much as possible. Me and 2 other girls from the hostel hired a Tuk-Tuk for the day and decided to do the small lap. This small lap included around 10 temples and started with Angkor Wat. Our driver drove us from temple to temple and then we could walk around the temples and spend there as much time as we wanted. We spend the whole day at the temples and walked quite a lot. At night, we got back to the hostel we were all pretty tired. 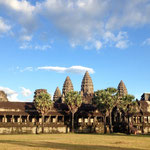 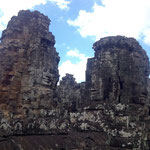 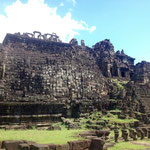 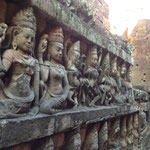 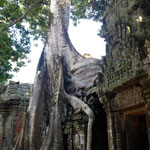 Siem Reap is pretty lively during night time. They have several night markets with street food and lots of restaurants and bars. The also sold some quite exotic specialties, like crickets, spiders, snakes and maggots at the night markets. We decided to get a small selection to try. It actually looks a lot worse than it tastes and it takes some willpower to eat these insects, but in the end they didn't taste too bad. My favorite were the crickets, a crunchy and salty snack. 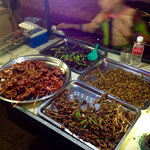 Begin to the Beginning

After a couple days in Siem Reap, I went back to the place were I originally started my trip. Back to Bangkok. From Siem Reap I took a bus to the border and then after crossing the border we took mini vans to Bangkok. Unfortunately, this time the departure and immigration process to very long. It took almost 2 hours to departure from Cambodia and then over 2 hours to enter back into Thailand. On top of that everyone had to carry there stuff with them and as usual it was very hot and humid. Once all of our group survived the immigration procedure, we were able to go to Bangkok.