After Bangkok, I took a night train to the north of Thailand and spend there around 10 days in Chiang Mai and Pai. Taking the train is a very popular way to get up north, especially for backpackers, since its cheaper than flying. When we arrived in Chiang Mai it was mainly backpackers getting off the train. The journey itself was really nice.    During the night, the train seats were flipped into beds. The beds were quite comfortable and it was possible to get a good sleep. For me it was the first time on a night train and thought it was really nice.

Chiang Mai is a really nice city and has around 200 Temples. So if you want to, you can easily go from temple to temple and spend lots of time visiting them. I went to two or three temples myself. Chiang Mai feels a lot more relaxed and quieter than Bangkok and I really enjoyed my time there. I arrived in Chiang Mai on a Sunday, which was nice because I got to experience the weekly Sunday night market. The market starts at around 5pm and goes over several streets in Chiang Mai. You can do lots of shopping for clothing and souvenirs and eat really good street food. Besides the hundreds of temples, Chiang Mai is also known for it's cooking classes. I took a cooking class were I learned to cook proper Thai food, like pad Thai, papaya salad and a good curry. I really enjoyed the cooking class and I'm excited to take the recipes home and try them out on my own. 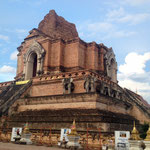 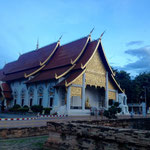 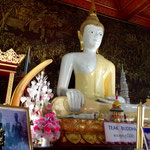 During my stay in Chiang Mai, I went on a 3-day trekking tour that included 2 nights in the jungle. The Tour was about 1.5 hours outside of Chiang Mai in the mountains. We were a small group of 4 and had a guide with us. During the first 2 days we usually went uphill for a about 1.5 to 2 hours and then stopped at a waterfall to take a break and go swimming. Afterwards, we continued walking for another 1 to 1.5 hrs to get to our sleeping place for the night. The first night we spend in the middle of the jungle with a family and slept in a bamboo hut. This place was in the middle of nowhere and all you were able to see was the jungle. The view from there was really nice and at night you were able to see lots of stars. The second night we spend in another bamboo hut, which was right next to a river and across from a little village. After we arrived there, we went over to the village to explore it. While we were walking through the village, it started pouring rain and we were trying to find some place where we could stand and wait for the rain to pass. A family saw us and invited us into there home. We sat down and tried to communicate with them. The family was really friendly and after just a short time, they got a out several small water bottles filled with happy water. Happy water is a homemade rice schnaps and of course we weren't allowed to leave before the bottles were finished. So when we left, the rain had already stopped for awhile and it was dark outside. Since we didn't expect to get back in the dark, we had no flashlights with us. Just our guide had his phone so we were able to see a little. But eventually we made it back safely. On the third day of the trek, we just went for a short walk and then went bamboo rafting. The raft took us down a river where we got picked up by a truck that took us back to Chiang Mai.

Overall, I really enjoyed the trekking and I am glad that I've done it. 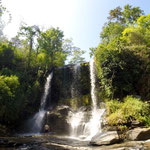 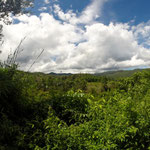 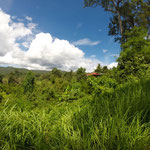 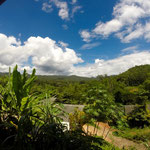 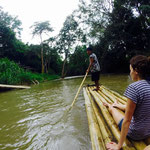 After Chiang Mai, I went with a minibus to Pai. Pai is a lovely little hippie village north of Chiang Mai. It is right in the mountains and is surrounded by rice fields. It's the perfect place to relax for a couple of days. During the day you can either just relax in your hostel and lay in a hammock or you can visit one of the waterfalls around Pai. And then in the evening you can go to one of the many bars, where they usually play live music. Pai is a very nice little village and it is easy to there longer than expected. I've met a couple people that planned to stop in Pai only for a couple days, but they ended up staying there for most of their time in Asia. 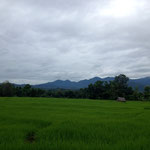 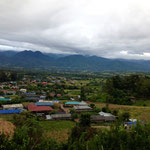 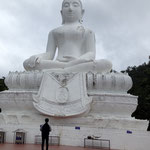 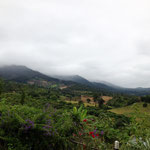